My third and final Destination Senior Portrait session with my Class of 2016 Senior Models was with Lacie in the Astoria area.  I have visited and driven through Astoria on many occasions and every I would dream of doing some Senior Portraits in many of the locations I would see.  Finally my dream cam true!  We started out at the Astoria Column, we had some fun throwing small wooden planes sold in the gift shop from the top of the tower and then made use of the awesome view to get the bridge and mountains as a backdrop.

We pondered the idea of going to the famed house where they filmed the movie Goonies, but we decided against it and instead explored the surrounding residential areas and found a nice shaded spot for some natural light portraits.

Next we visited a pier along the river, there were some great buildings on the pier where we could shoot inside and out.

Next we worked out way down the river and found a couple spots with boats, pilons and an old moss covered dock ruins.

We concluded out day at the wreck of the Peter Iredale.  This boat ran ashore on October 25, 1906 and has been steadily decaying ever since.  The hope was for a vibrant sunset as a backdrop for the portraits but the clouds in the distance had other ideas.  So, rather than depend on the weather we added out own vibrant colors to the scene by putting a red gelled strobe inside of the wreckage.  This is something I had done previously when shooting a landscape photo of the wreckage and always thought it would be fun to add a High School Senior into the mix.  Here is the end result.

The second of my three Destination Senior Portrait sessions with Class of 2016 Senior Models was with Sky.  My base of operations for my three scheduled days was Seaside Oregon, for Sky’s senior portraits we traveled south to see what we could find.  As can be expected on the Oregon Coast in the spring we had it’s fair share of of rain, but we had enough breaks in the downfall to get some great photos.  The first place we stopped was just past Canon Beach and it featured some great rock formations and a very cool waterfall with a shallow enough stream for some rain boot stomping!

Next in our exploring we found a great dense forest spot with a lot of moss covered trees and a nice hint of sunlight peaking through for a rim light on some natural light portraits.

We continued down the coast and found a great turnout overlooking the ocean, the town of Manzanita and it featured some great dramatic clouds.

Next we did some urban style portraits in the small town of Wheeler, Oregon.

In the Rockaway Beach area we braved a few raindrops to get this portrait.

The tide was out so we were able to get some fun portraits on some rock formations just before Garibaldi.

We finished up our time in the town of Garibaldi.  There is a great public pier there that I have been dying to do portraits on for years, I tried one time before on a trip with friends but the rain hindered that effort.

After the pier the plan was to do some photos in another spot for sunset, but it started raining pretty hard so we stuck around Garibaldi to see if the rain would stop.   Thankfully it stopped just long enough for us to catch a little bit of the sunset peaking through the clouds. 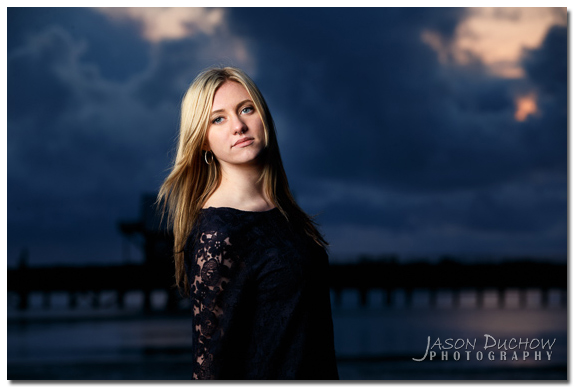 Jason Duchow Photography is located in Oldtown, Idaho and does on location portraiture throughout Northern Idaho and Eastern Washington.   Jason specializes in environmental portrait photography often with the use of  dramatic lighting techniques and is also known for his freelance sports photography work.  Jason is also a Sponsored Pro for Interfit Photographic (http://interfitphotographic.com/)

I have long wanted to do some portraits on the Oregon Coast and finally this year during spring break I had the opportunity to do some destination senior sessions with three of my Class of 2016 Senior Models.  My first session was with Faith, an upcoming senior from Lakeland High School.  I have had my eye on faith as a senior model since the basketball season of her freshman year.  Faith is one of the friendliest people I have ever met, every time I would be at a Lakeland basketball game she would seemingly go out of her way to make sure to say hi and give me a huge smile.  Not only was she engaging in person but she was also always very active with the content I would post on social media, this of coruse is very helpful when you want people to see your photos online!  Finally, after three years of waiting I was able to invite her to be a part of my team of senior models and she agreed without hesitation!

We started out our session at Ecola State Park located between Seaside and Cannon Beach.  Before we could make it to the beach we had to stop and get a few shots in moss covered trees.

Then onward to the beach.

After spending some time on the water we headed back to Seaside to grab some lunch.  After lunch we visited a location that I knew would be perfect for some photos with Faith, the Seaside Carousel Mall.

On the previous photos I used a fast shutter speed so that everything was crisp and sharp, but I also wanted to do some photos where you had the sense of the motion of the carosel so I used a technique called “Panning”.  For this technique you have to use a slow shutter speed and move the camera along with the motion of your subject.  This technique is often used with car and bicycle racing but I wanted to employ it here for a portrait.  The goal is to get motion blur on most of the objects in the photo while still having your main subject be relatively sharp, here is one of my favorite takes using this method.

We finished up in the mall with a few still portraits and a some laughs.

After the Mall we walked around Seaside a bit and found a few spots around town.

With evening approaching we headed back to Ecola State Park to get the beginning of sunset.

Then, for our final photos of the day we found ourselves at Cannon Beach.

I am so glad that I had the opportunity to spend the day with Faith we had a great time and we ended up with some fun and beautiful images and hopefully some great memories as well!

Jason Duchow Photography is located in Oldtown, Idaho and does on location portraiture throughout Northern Idaho and Eastern Washington.   Jason specializes in environmental portrait photography often with the use of  dramatic lighting techniques and is also known for his freelance sports photography work for www.idahosports.com, The Coeur d’Alene Press, The Bonner County Daily Bee, Priest River Times, Newport Miner, Living Local and a handful of other newspapers and publications.